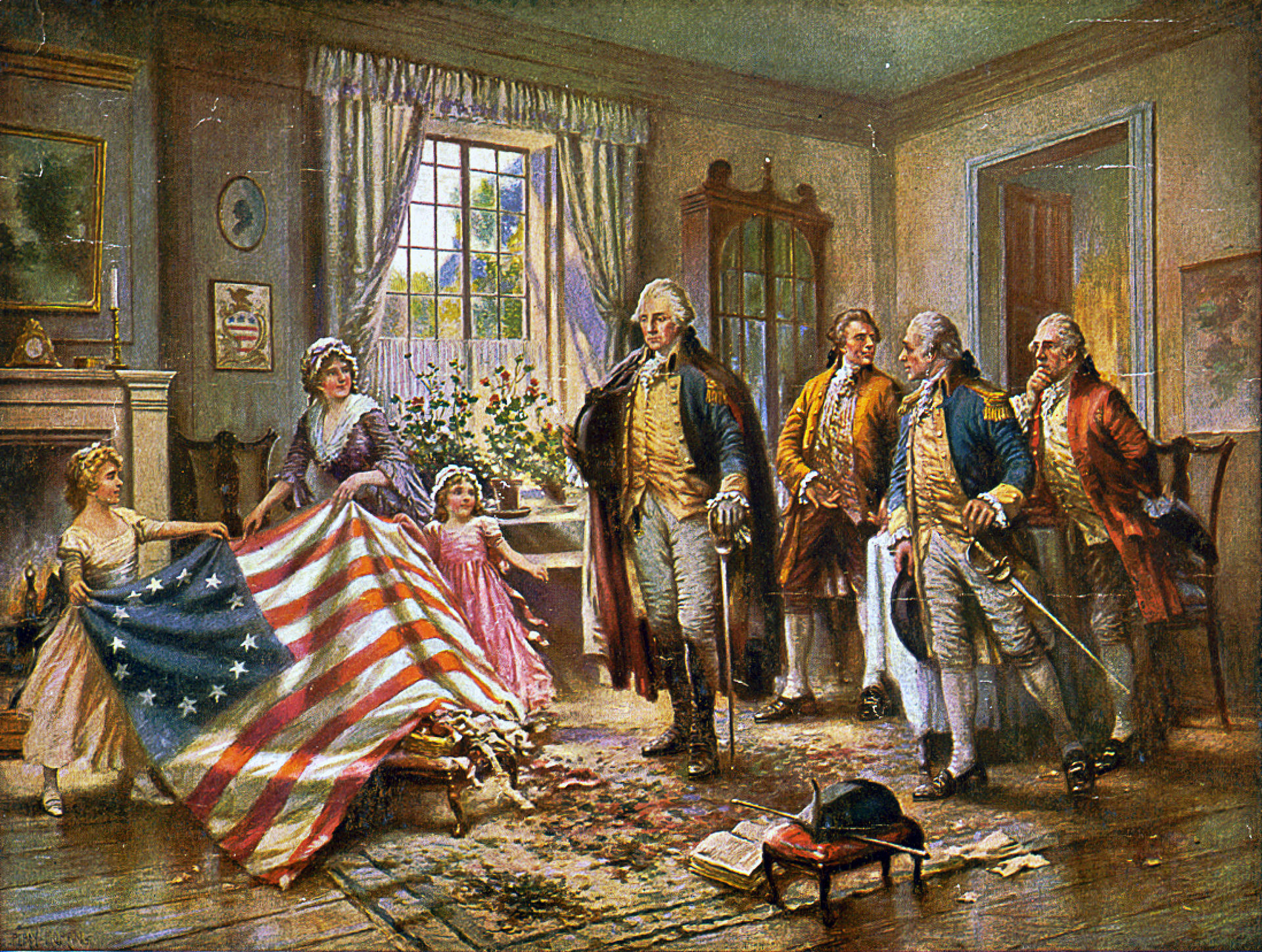 On this day in 1777, during the American Revolution, the Continental Congress adopts the Stars and Stripes as the national flag:

“Resolved, that the flag of the United States be thirteen stripes, alternate red and white; that the union be thirteen stars, white in a blue field representing a new constellation.” 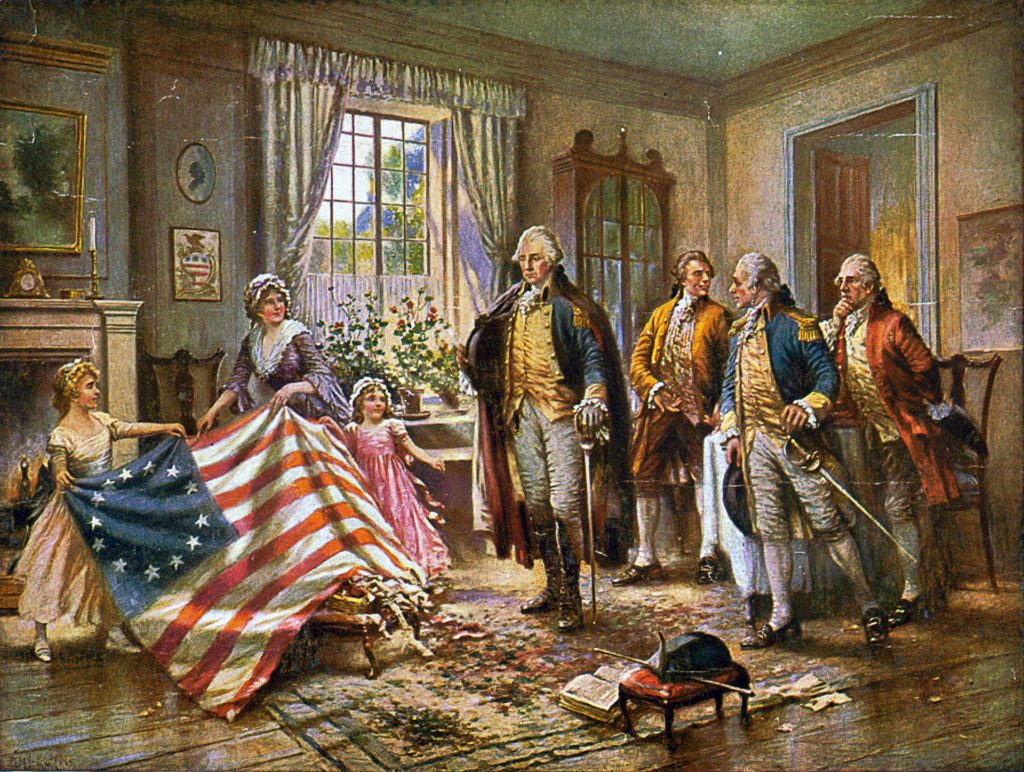 Many circumstances have recently conspired to turn our thoughts to a critical examination of the conditions of our national life, of the influences which have seemed to threaten to divide us in interest and sympathy, of forces within and forces without that seemed likely to draw us away from the happy traditions of united purpose and action of which we have been so proud. It has therefore seemed to me fitting that I should call your attention to the approach of the anniversary of the day upon which the flag of the United States was adopted by the Congress as the emblem of the Union, and to suggest to you that it should this year and in the years to come be given special significance as a day of renewal and reminder, a day upon which we should direct our minds with a special desire of renewal to thoughts of the ideals and principles of which we have sought to make our great Government the embodiment.

I therefore suggest and request that throughout the nation and if possible in every community the fourteenth day of June be observed as FLAG DAY with special patriotic exercises, at which means shall be taken to give significant expression to our thoughtful love of America, our comprehension of the great mission of liberty and justice to which we have devoted ourselves as a people, our pride in the history and our enthusiasm for the political programme of the nation, our determination to make it greater and purer with each generation, and our resolution to demonstrate to all the world its vital union in sentiment and purpose, accepting only those as true compatriots who feel as we do the compulsion of this supreme allegiance. Let us on that day rededicate ourselves to the nation, “one and inseparable” from which every thought that is not worthy of our fathers’ first vows in independence, liberty, and right shall be excluded and in which we shall stand with united hearts, for an America which no man can corrupt, no influence draw away from its ideals, no force divide against itself,-a nation signally distinguished among all the nations of mankind for its clear, individual conception alike of its duties and its privileges, its obligations and its rights.

In Witness Whereof, I have hereunto set my hand and caused the seal of the United States to be affixed.

Done at the City of Washington this thirtieth day of May, in the year of our Lord one thousand nine hundred and sixteen, and of the independence of the United States of America the one hundred and fortieth.”

Flag Day was formally established in 1949 when President Harry S. Truman signed the Act of Congress:

WHEREAS the American flag, which has become the symbol of our freedom, was adopted by the Continental Congress on June 14, 1777; and

WHEREAS it is our custom to observe June 14 each year with ceremonies designed not only to commemorate the birth of our flag but also to rededicate ourselves to the ideals for which it stands; and

WHEREAS this beloved emblem, which flies above all our people of whatever creed or race, signalizes our respect for human rights and the protection such rights are afforded under our form of government:

NOW, THEREFORE, I, HARRY S. TRUMAN, President of the United States of America, do hereby ask that on Flag Day, June 14, 1949, the people of the Nation honor our colors by displaying them at their homes or other suitable places and by giving thanks for their privileges as citizens under this flag as well as by engaging in earnest contemplation of the obligations inherent in citizenship. I also direct the appropriate officials of the Government to display the flag of the United States on all Government buildings on Flag Day.

IN WITNESS WHEREOF, I have hereunto set my hand and caused the Seal of the United States of America to be affixed.

DONE at the City of Washington this 24th day of May in the year of our Lord nineteen hundred and forty-nine, and of the Independence of the United States of America the one hundred and seventy-third.

Later, on this day in 1954, President Dwight Eisenhower signs a bill to include “Under God” in the Pledge to the Flag:

FROM THIS DAY FORWARD, the millions of our school children will daily proclaim in every city and town, every village and rural school house, the dedication of our nation and our people to the Almighty. To anyone who truly loves America, nothing could be more inspiring than to contemplate this rededication of our youth, on each school morning, to our country’s true meaning.

Especially is this meaningful as we regard today’s world. Over the globe, mankind has been cruelly torn by violence and brutality and, by the millions, deadened in mind and soul by a materialistic philosophy of life. Man everywhere is appalled by the prospect of atomic war. In this somber setting, this law and its effects today have profound meaning. In this way we are reaffirming the transcendence of religious faith in America’s heritage and future; in this way we shall constantly strengthen those spiritual weapons which forever will be our country’s most powerful resource, in peace or in war. (emphasis added)

Finally, for a primer on flag display etiquette, here is a portion of United States Code Title 4 Chapter 1 Section 6:

§ 6. Time and Occasions for Display.
(a) It is the universal custom to display the flag only from sunrise to sunset on
buildings and on stationary flagstaffs in the open. However, when a patriotic
effect is desired, the flag may be displayed 24 hours a day if properly
illuminated during the hours of darkness.

(b) The flag should be hoisted briskly and lowered ceremoniously.

(c) The flag should not be displayed on days when the weather is inclement, except
when an all-weather flag is displayed.

From "Defence of Fort M'Henry" to Our National Anthem
2 replies