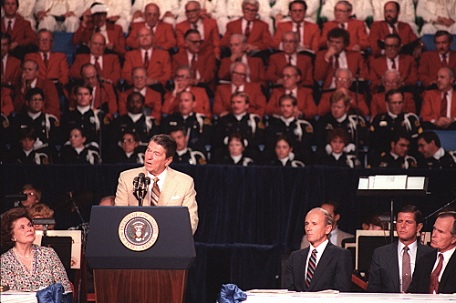 On this day in 2004, Ronald Reagan, the 40th U.S. President, dies after a lengthy battle with Alzheimer’s disease.

Despite the withering disease, Reagan’s legacy as “The Great Communicator” endures. His ability is exemplified by the following ever-pertinent remarks from a prayer breakfast in Dallas, TX in August 1984:

It’s fitting that as a young man Reagan was a lifeguard, so he knew a thing or two about what it takes to stay afloat.

Ronald Reagan on "the true sources of value"

Ronald Reagan and "the shining city upon a hill"
0 replies

John Adams and the President’s House : “On this house… under...

D-Day, Operation Overlord : Let us all beseech the blessing of Almighty God
Scroll to top
MENU