On this day in 1788, the Commonwealth of Massachusetts ratifies the Constitution, thereby becoming the sixth state in the Union.

The state motto is “Ense petit placidam sub libertate quietem.”
It means “By the sword we seek peace, but peace only under liberty.”

However, the full Latin phrase which serves as the source of this motto provides proper context. First, that phrase: “Manus haec inimica tyrannis ense petit placidam sub libertate quietem.”
Now, the translation: “This hand of mine, which is hostile to tyrants, seeks by the sword quiet peace under liberty.”

Much like the Declaration of Independence, the Constitution of the Commonwealth of Massachusetts also counts the right of “enjoying and defending [our] lives and liberties” among Our “unalienable rights.”

What follows are some additional key excerpts from that Constitution. First, the third and final paragraph of the Preamble:

“We, therefore, the people of Massachusetts, acknowledging, with grateful hearts, the goodness of the great Legislator of the universe, in affording us, in the course of His providence, an opportunity, deliberately and peaceably, without fraud, violence or surprise, of entering into an original, explicit, and solemn compact with each other; and of forming a new constitution of civil government, for ourselves and posterity; and devoutly imploring His direction in so interesting a design, do agree upon, ordain and establish the following Declaration of Rights, and Frame of Government, as the Constitution of the Commonwealth of Massachusetts.”

To conclude, this next, highly instructive portion immediately follows the Preamble:

It is the right as well as the duty of all men in society, publicly, and at stated seasons to worship the Supreme Being, the great Creator and Preserver of the universe. And no subject shall be hurt, molested, or restrained, in his person, liberty, or estate, for worshipping God in the manner and season most agreeable to the dictates of his own conscience; or for his religious profession or sentiments; provided he doth not disturb the public peace, or obstruct others in their religious worship. 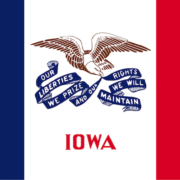 The State of Iowa : Grateful and Dependent