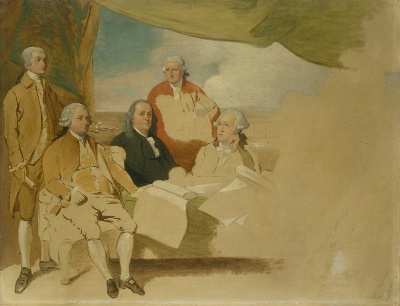 On this day in 1779, the Continental Congress appoints John Adams to lead the negotiation of peace and commerce treaties with Great Britain. He was eventually joined by Benjamin Franklin, Thomas Jefferson, and John Jay.

Speaking of Jay, it was also on this day in 1779 that he is appointed minister to Spain in order to gain support for the American Revolution and the recognition of American independence.

Both were part of the Commission that negotiated the Treaty of Paris in 1783.

Below is an image of a painting of that esteemed Commission.

Muhlenberg : First Speaker of the House, first a speaker in God's house
0 replies

The State of Nevada : Battle Born, All for Our Country
Scroll to top
MENU