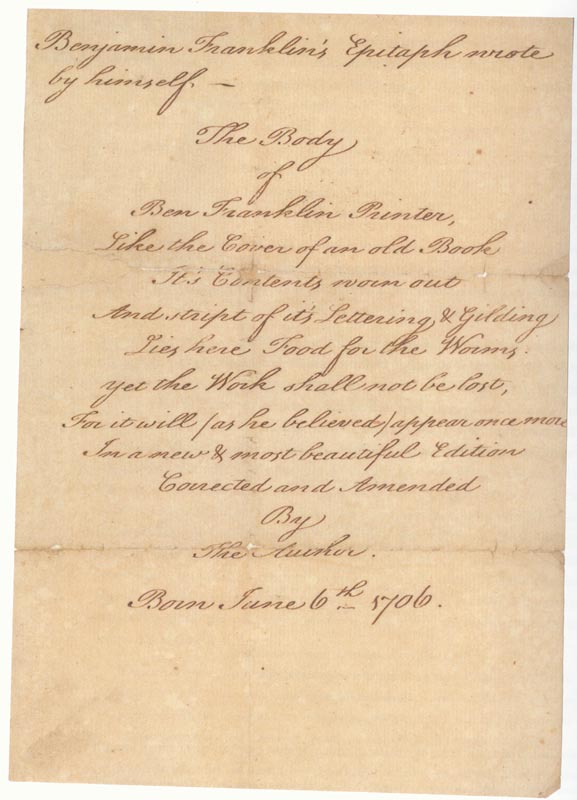 On this day in 1706, Benjamin Franklin, the renowned Founding Father and prolific printer, patriot, scientist, statesman, etc. is born in Boston. He was the fifteenth of seventeen children.

Franklin lived until the ripe old age of 84, and died in his adopted home of Philadelphia, where he is buried.

Even in his early twenties, his wit and wisdom was on full display. Of note, in 1728 he wrote his own epitaph, revising and sharing it with friends throughout his life. Here is one such version, with a copy below:

The Body
of
Ben Franklin Printer,
Like the Cover of an old Book
Its contents torn out
And stript of its Lettering & Gilding,
Lies here Food for the Worms,
yet the Work shall not be lost:
For it will, as he believed, appear once more
In a new & most beautiful Edition,
Corrected and Amended
By
the Author.

“I have lived a long time…”

At age 81, as the elder statesman at the Constitution Convention in his adopted home, Franklin urged the Assembly toward morning “prayers imploring the assistance of Heaven, and its blessings on [their] deliberations.” In so doing, he made this famous quote, which inspired Our Benjamin Franklin shirt: 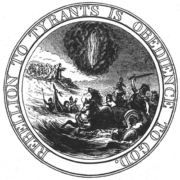 Patriot Matthew Thornton : "Duty to God, to ourselves, to Posterity"

John Adams aboard the Boston
0 replies

Dwight Eisenhower : All Nations, Under God
Scroll to top
MENU